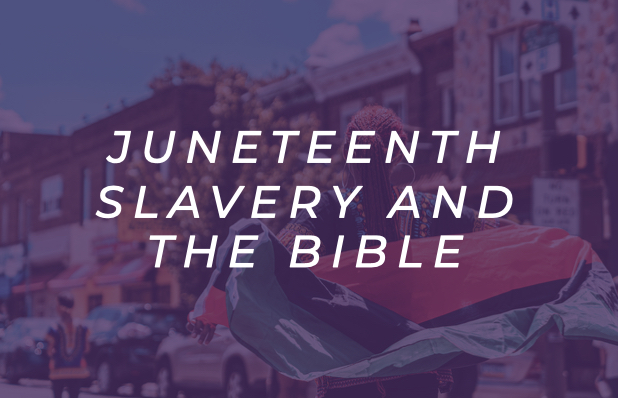 Today is Juneteenth. You may not know what this holiday is, but it’s a very important day. Juneteenth is our nation's oldest celebration of the end of slavery. On June 19th, 1885, General Gordon Granger and his soldiers marched into Galveston, TX announcing that the Civil War had ended and that the slaves were free. This was over two years since President Lincoln issued the Emancipation Proclamation which officially ended the institution of slavery in America.

Granger delivered the news himself, reading General Order Number 3: "The people of Texas are informed that in accordance with a Proclamation from the Executive of the United States, all slaves are free. This involves an absolute equality of rights and rights of property between former masters and slaves, and the connection heretofore existing between them becomes that between employer and free laborer.”

Juneteenth is the celebration that the evil institution of slavery was ended in our nation. But that certainly wasn’t the end of our nation’s original sin.

So what are we to make of slavery in the Bible?

American Slavery Was Clearly Evil And Against God’s Will

The American Slave trade involved targeting a race of people, kidnapping them from their homeland, and forcing them into generations of unending slavery. The Bible clearly says this is evil. Exodus 21:16, “Whoever steals a man and sells him, and anyone found in possession of him, shall be put to death.” In 1 Timothy 1:10, Paul has a list of ungodly practices and puts enslavers right in the middle. The King James Version translates the word as “man-stealers.” The fact that America forefathers kidnapped West Africans, loaded them on ships like animals, and forced them into life-long slavery is an unspeakable evil. And God hated it. American slavery was clearly evil and against God’s will.

Slavery In The Bible Was Often Different Than American Slavery.

Slavery was often related to debt. If someone had a debt they couldn’t pay, they would go into slavery to work to pay it off. Slavery was not always racially motivated and it was very rarely life-long. This type of slavery was often done by oppressive and violent nations. God gave Israel instructions in the Old Testament for setting slaves free every 7 years to ensure that no would end up in life-long servitude (Exodus 21:2). God had free Israel from oppressive slavery in Egypt and they were to avoid becoming oppressors themselves.

In the Roman world, slaves made up about one-third of the population. They were often the working class, but even some doctors and lawyers were slaves. Paul encourages slaves in 1 Corinthians 7:21 to earn their freedom if they can. Paul even urges Philemon to welcome home his runaway slave, Onesimus, as a brother (Philemon 1:16). Slavery in the Bible was not exactly the same as slavery in America.

The Bible Has Actually Motivated Christians To Work To End Slavery

William Wilberforce was an English politician that led the charge to end the West-African slave trade and to end slavery altogether in England. He was a strong believer. It was his faith that was rooted in the Bible that motivated him. He gave his entire life to ending slavery. And today, there is a Christian group fighting slavery called International Justice Mission. They are the largest anti-slavery organization in the world. They are working hard to free the over 40 million people in slavery right now. There are more people living in slavery not now than at any other time in history. The church of Jesus Christ is leading the charge to end it.

In Christ, there is not slave or free. Christ is all and in all.

So let’s join the Black community and celebrate this historic day. And let’s join with our Black brothers and sisters in Christ to celebrate that if the Son has set us free, then together we are free indeed.