A Lament for Abortion 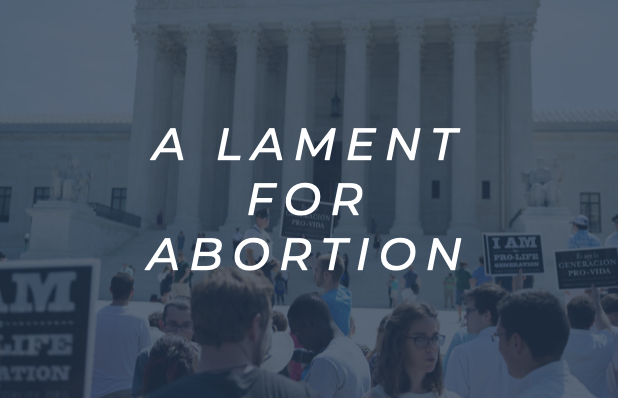 January 22, 2021 marked 48 years since the Supreme Court ruled on Roe v. Wade. The United States has seen roughly 60 millions abortions since that decision. There are an estimated 2,500 abortions every single day in the United States.

Lord, you tell us this Psalms 139:13—"For you formed my inward parts; you knitted me together in my mother’s womb." Your word also tells us that we are made in your very image. Lord we must acknowledge that life in the womb is a beautiful work of your hands.

Father, we lament for the lives that were never allowed to cry, laugh, breathe, and enjoy your creation outside of the womb. Father, we lament for the millions of innocent lives that have been taken for the sake of ease and convenience. We mourn that we have put ourselves in the place of God, the place you alone should occupy, and we have seen ourselves fit to decide if you creation should live or die. We grieve over how we as a society try to justify abortion by calling it anything other than what it truly is, the intentional killing of an unborn child, that bears your image. Abortion is an assault against your will in creation. It is a declaration of war against your purposes.

Lord, we grieve with those women who have made the decision of have an abortion. Lord, we lament for the damage that having an abortion has caused so many women, perhaps even women in this room today. We have great sorrow for those women who now struggle with pain, regret, guilt, and even shame, as a result of an abortion. Father, may they find great confidence in the fact that you are eager to show them grace and redeem what is broken. Lord, we grieve for women who have been abandoned by their family, friends, and possibly even the church, as a result of an abortion. Lord, may they see that Christ will not leave them or forsake them, and that he is willing and able to bring healing and restoration.

Lord, we also grieve for the role that men have played in abortion. We are grieved by men who have fathered children and not fulfilled their role of loving and providing for the needs of their family. Lord, we are saddened when, pregnancies come as a result of men doing unspeakable harm to women by means of sexual assault. We have great sorrow over the fact that many men have encouraged the abortion of their own children by either their words or their actions.

Lament for our Country

Lord, we lament that in our country, it is still legal to murder the unborn with no consequences. Lord, we agonize over the fact that the United States is deemed one of the safest and most socially acceptable places to have an abortion in the world. We grieve that many expectant mothers are better discipled by Planned Parenthood than the Church and the Gospel of Jesus Christ.

Lord, we grieve when your church has been silent on the injustice of abortion. Father, we lament the church's role in not loving and showing grace to those hurting as a result of an unexpected pregnancy and subsequent abortion. God, we even ask that you forgive us if we have become calloused and indifferent to the issue of abortion. Lord, we confess we can be more concerned with viewing this issue from a political standpoint than from a biblical perspective.

Lord, thank you that you ear is attentive to the cries of your people.

A Lament for Abortion